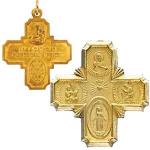 A four way religious medal is fashioned in the shape of a cross, also known as a cruciform.  The cruciform is adorned with the Sacred Heart on the top of the medal and the Miraculous (referring to St. Mary) on the bottom.  On the right side of the cruciform, you will find St. Christopher; St. Joseph appears on the left.

The cross is a symbol that is closely identified with the Christian faith.  Seeing the cross brings to mind Jesus’ sacrifice for the sins of the people.  Wearing a cross is a reminder to the wearer of his or her faith and also an outward sign to others that this individual is a Christian.

In fact, many Christian churches are laid out in the form of a cruciform.  The altar is positioned at the front (generally at the east end of the church).  Oftentimes, an elaborately-decorated stained-glass window is found behind the altar.

The baptismal font is often positioned at the back of the church (the bottom of the cruciform).  To the north and south, which would be the “arms” of the cruciform, you may find the organ, a side chapel, or a room for gatherings of many kinds.

By entering a church, the worshiper not only sees the image of the cross displayed in the interior, he or she is actually a part of the cross itself.  In this way, we are reminded that the “Church” is the people, not the building where the worship services are conducted.

Knights of old carried plain swords known as cruciform swords.  When the sword was held with the tip pointing down, once could see that it was in the shape of a cross.  Some have suggested that this shape was adopted to remind the knights of their religious faith.

In reality, however, it was popular because of the flat crossbar that offered protection to the hand of the sword-bearer.  The crossbar could also be used to trap the enemy’s sword during hand-to-hand combat.

The Sacred Heart of Jesus

At the top of the four way medal is the image of the Sacred Heart of Jesus.  The heart is symbolic of love.  We “give our heart” to our Beloved.  It is also a symbol of life itself - if our heart ceases to pump blood, the body dies.

The heart is also symbolic of what is essential.  We “get to the heart of the matter” when we eliminate secondary ideas or issues and concentrate on the basics.

By wearing the Sacred Heart, Believers are reminded of God’s great love for all people, His children.

The image at the bottom of the four way medal is that of St. Mary, the mother of Jesus.  Very little information about Mary is contained in the Gospels.  We can assume, however, that she was a woman of very strong religious faith and a deep thinker.  After Jesus was born and visited by the Three Wise Men, we are told that she kept all these things in her heart.

St. Joseph, the foster father of Jesus, is referred to in the Bible as a “just man”.  He was apparently a skilled craftsman who passed on his knowledge to his son, Jesus.  St. Joseph is the patron saint of workers.  His principal feast day is observed on March 19.

The fourth image on the medal is that of St. Christopher, a martyr from the third century.  According to legend, St. Christopher, who became a Christian as an adult, took on the challenge of carrying people across a raging stream.

One day, Christopher was entrusted with carrying a child across the stream.  This child seemed to grow heavier and heavier as Christopher made his way across.  At one point, it seemed to him that he was carrying the weight of the world upon his shoulders.  When asked, the “child” identified himself as the Creator and Redeemer of the World.

After they emerged from the water, Christopher was directed to push his staff into the ground.  By the next morning, it had turned into a palm tree (complete with fruit).  As a result of this event, many people living in the area embraced the Christian faith.

The local king became enraged and put Christopher into prison.  He was tortured and eventually beheaded.

St. Christopher is the patron saint of travelers, drivers (trucks, taxis, buses, etc.) and sailors.  His feast day is observed by Roman Catholics on July 25.