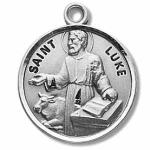 St. Luke was the author of two of the books that make up the Bible: the Gospel that bears his name and the Acts of the Apostles. He was also not Jewish, but both a Gentile and a Greek.

St. Luke was also a physician. We can't assume because of his profession that he was well-off, though. Some Biblical scholars have put forward the theory that Luke could very well have been born into slavery. At that time, wealthy families were known to train slaves in the medical arts; that way, they had access to a family physician in residence.

St. Luke travelled with St. Paul and ministered with him, starting in about 51 AD. What became of St. Luke after St. Paul's death is not clear; some accounts claim he was martyred and others state he lived to old age. What we do know about this man we learn from his writing.

The Gospel According to Luke includes accounts of numerous miracles and parables. St. Luke's Gospel includes the story of the Prodigal Son being welcomed home by his father, which is an indication of St. Luke's feelings that forgiveness and mercy to those who have sinned are of primary importance. St. Luke's Gospel also includes the story of the forgiven woman who washed Jesus' feet with her tears and dried them with her hair.

We can also conclude that St. Luke had a great respect for women, especially the women in Jesus' life. He writes about the Annunciation; part of the Hail Mary is taken directly from St. Luke's writings ("Hail Mary full of Grace"). Words spoken by Mary's cousin Elizabeth and recorded by St. Luke are also still used today ("Blessed are you and blessed is the fruit of your womb Jesus").

St. Luke is the patron saint of doctors and surgeons, which certainly makes sense, given his profession. When depicted in paintings, oftentimes he is shown with either an ox or a calf. These animals are symbols of sacrifice and bring to mind Jesus' sacrifice for the sake of humanity.